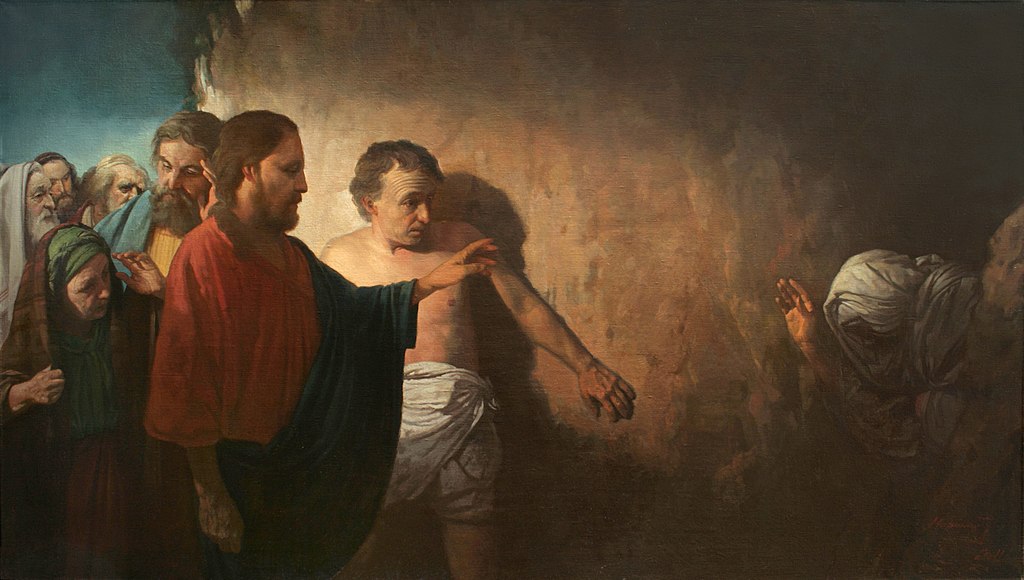 In Ezekiel’s vision he saw a valley of dry bones. A valley of death. And God asked him,

“Son of man, can these bones live?”

Of course, in Ezekiel, the prophecy concerns the people of Israel, who are like a valley of dried bones. Lifeless. In the prophetic vision, God shows himself as one able even to raise the dead, to rebuild bodies that had crumbled away into dust.

Indeed, more than a few people are brought back from death as recorded in the OT. There is the son of the widow whom Elisha raises to life again. Or the rather random story where a dead body was hastily thrown into the tomb of Elisha. When the corpse touched his bones, the man came back to life again.

But nothing changed. The widow’s son lived to die another day. Likewise, the unnamed man whose corpse had the fortune—or misfortune—of touching Elisha’s body and revivifying, also died again.

Resurrection from the dead, you see, doesn’t actually change anything. All alike proceed on to Sheol.

Consider now the resurrection of Lazarus. He is the last named of various people Jesus raised from the dead in his ministry: Jairus’ daughter and the son of the Widow of Nain being the other two we are told about. Lazarus, the friend of Jesus, was dead some four days, and Jesus called him back. Back to what? To life, yes. But what sort of life? What had really changed for Lazarus? About him?

While the idea of resurrection from the dead has a certain appeal to it, perhaps a fleeting glimpse of the immortality that people long for and hope for, in truth, the resurrection of Lazarus is a cruel trick, if that is all you have to offer. To bring someone back from the dead is of no great advantage if they only will die again.

Throughout the Gospel of John, Jesus teaches that he has come to bring eternal life. What does he mean by that somewhat enigmatic phrase? That existence will keep going on? That our hair will grow grayer forever, are aches multiply, and our memories dwindle? That, if one of his followers happens to die, he will raise them back to life again?

An eternity of resurrection unto dying again is an endless cycle of pain, not a deliverance. With Lazarus we see death set aside for a time, but only for a time. He travelled into death, was pulled out again, but there was only one place for him to go: back into the arms of death again.

“I am the resurrection and the life. Whoever believes in me, though he die, yet shall he live, 26 and everyone who lives and believes in me shall never die.”

As Jesus stands before the dead man Lazarus, he does not just claim to be able to bring back life—as he has done before and is about to do again. Lazarus will come forth from the tomb. The dead man will walk out alive. But that is not all Jesus is talking about. He claims to be life. He is the resurrection and the life.

In the death of Jesus, Life is killed. The Resurrection is sent to the grave. And it appears that all hope is lost. It appeared that Death had finally triumphed. That God’s creation was doomed forevermore to Sheol. For if even “The Life” is sent to Death, then what hope is left?

If Death is the enemy, the lord over us, and Jesus is The Life, the question to be answered is whether Death is, in the end, stronger than Life. After all, bringing people back from the dead does not deliver them from Death. So long as nothing changes, death is the only destination to which all or going.

But on Easter morning, everything changed.

The resurrection of Jesus from the dead is not a vacation from death, as the resurrections before him. The resurrection of Jesus is a tear in the fabric of reality through which a newer, more real reality shines through. Through that tear, a whole new creation steps in, bright and clean, into the drab and dusty confines of this present world. A life everlasting. The Life which is stronger than death and cannot be contained in Sheol.

In Jesus, The Life is not just called back from death—this is no “near death experience” or “15 minutes in heaven.” This is not even Lazarus, the dead man, called back to life. It is Life which has gone down into Death and emerged triumphant. Jesus, the undead, the deathless, the dead who is dead no more, wields power over Death, the great enemy.

In the resurrection of Jesus, we see what is to come. We find hope. Hope that life is not just a one-way trip to death. Hope that, yes, the dry bones can live again. They can live because Jesus has an invincible life. Is Life Everlasting. All who believe in him, though they die, will live. Because Jesus can go down into death with them and bring them through it into True Reality. The New Creation where death has no place because Jesus has conquered it, banished it, and all who stand in Jesus’ hands are forever outside the reach of death.

Jesus is resurrection. Jesus is life.

As he stepped out from that tomb, everything had changed. Where, o Death is your sting? Jesus has taken it, tasted all your poison, and yet has walked out of you, triumphant.

Jesus says, “all who believe in me, though they die, they will live.” Death, the former end of all things, has become merely a waypoint along the journey to Life Everlasting. The hope of the follower of Jesus is that death is merely a vacation from life as we journey on in the trail blazed by Jesus—the trail through death into life. The Resurrection has triumphed and turned Death into a great doorway to Life Everlasting.

The picture at the top is an oil painting, Andrey Mironov, CC BY-SA 4.0 https://creativecommons.org/licenses/by-sa/4.0, via Wikimedia Commons